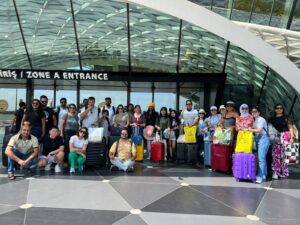 Are you planning a trip to Baku-Azerbaijan from Dubai? Our Eid special Azerbaijan-Baku Group Tour from Dubai (with Air Arabia Flight) is the best and cheapest way to explore Baku with your loved ones.

If you have been searching for the best Baku packages this holiday season, your search ends here. Customize the perfect Baku trip for your loved one from Dubai. Celebrate this Eid in Baku with the perfect holiday package that captures the spirit of the country and the best of Baku-Azerbaijan.

The below package is a group tour from Dubai and if you wish to travel alone we can customize the packages to Baku. You have the choice of booking land packages alone or packages with flights. We will assist you in planning a perfect trip to Baku-Azerbaijan with your preferred tours, activities, hotels, and more. Contact us today and plan the perfect holiday to Baku.

Get in touch with our travel expert

Want to speak to a travel expert?

Let our team of experts help you pick the best option for you!